The Vince Shute Wildlife Sanctuary, nestled in the North Woods of Minnesota offers visitors to our area the unique opportunity to learn about wild black bears and their behavior. Thousands come to the sanctuary every year not only to learn about the bears, but also to view the special group of wild bears that come to this location every summer. Safely, from the observation deck, one can view and photograph the intimate world of the normally reclusive black bear as they play, climb, vocalize and eat. Here, you can learn about the nature of the black bear - an animal that is often misunderstood and feared. Trained representatives of the sanctuary will interpret behavior as it happens and will present information about bear biology and habitat.

Located a few miles west of Pelican Lake and a short 20 minute drive from the town of Orr, the sanctuary encompasses approximately 360 acres. Within its boundaries consists a combination of habitats: aspen forests, cedar swamps, marshes, beaver ponds, streams and open meadows. All of these various habitats in the sanctuary are managed in a manner that is beneficial to the entire ecosystem. The sanctuary is not only a seasonal home to more than 50 wild bears, there is also an abundance of other wildlife that live within the sanctuary, such as whitetail deer, bald eagles, beavers, mink, timber wolves and bobcats to name just a few.

The sanctuary came to be when Vince Shute, a logger in the remote Northwoods began to question the practice of shooting the wild bears that came to their logging camp attracted by the smells of food preparation and disposal. He came to the conclusion that, "The bears weren't mean, just hungry." He began to place food for the bears in the meadow area in an attempt to keep them away from the buildings. This more peaceful approach worked and what began as an act of survival and co-existence slowly evolved into a labor of love and a special relationship developed between Vince and the bears. Concerned about what would happen to the bears after he was gone, and to help secure the bears' future, he donated his interest in the land for the formation of The American Bear Association to manage the sanctuary and to promote a better understanding of the black bear through education, observation and experience. 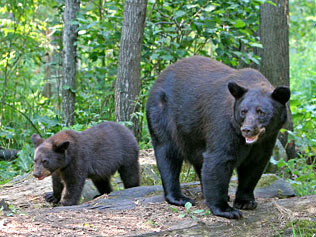 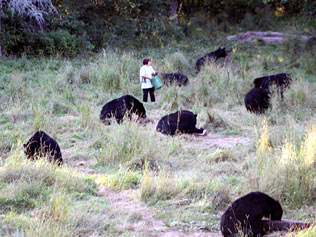 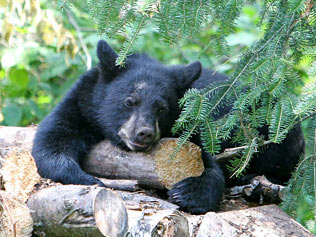 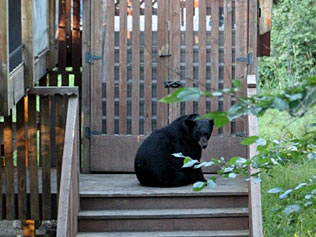